Jerusalem Children in Solidarity with Children of Gaza 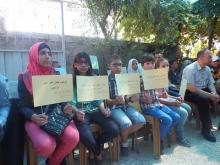 From the home of martyr Muhammad Abu Khdeir: Palestinian children in Jerusalem pause for moment of solidarity with the children of Gaza

Organized by the Palestinian Counseling Center, and with participation from Al Bustan Center in Silwan, children of Jerusalem gathered together at the home of martyr Muhammad Abu Khdeir in the Shu’fat neighborhood to show their support for their counterparts in Gaza.

Participants wrote messages of condolence and solidarity to those in Gaza, sang songs, and held signs with the names and ages of those children who have been killed in Israel’s latest military assault.

One of those who took part in the event, Aya, commented, “We came to pay condolences to Muhammad Abu Khdeir’s mother. We are all Muhammad Abu Khdeir, and any of us could’ve been targeted. We are very sad about his death and for the children in Gaza. All children have rights and this is a war against the rights of children.”

Rana Nashashibi, Director-General of the Palestinian Counseling Center, spoke during the vigil, saying, "We came to the home of the martyr Muhammad Abu Khdeir to make a tribute to the children of Gaza. There is no more important place to have this gathering than at this home, the location of the start of Jerusalem’s uprising that has since spread across the country.”

Ms. Nashashibi continued to say: “It’s true your pain is unbearable, and none of us accepts the sacrifice of children. Unfortunately, resistance means that sometimes we have to make sacrifices. We are here to say that every Palestinian who is martyred during our fight for independence will stay in our memories, our souls, and hearts, never to be forgotten. The resistance in Gaza is on our behalf, and aims at freeing us from occupation.”

The event was also attended by a number of community leaders, including His Eminence Archbishop Atallah Hanna, Mr. Ishaq Abu Khdeir, and Mr. Muhammad Odeh, a member of Al-Bustan Cultural Center in Silwan.